Getting Started With Custom Nanoblocking

Many of you have probably asked me this question - "Which set should I buy to make this?". I wish I can give a definite answer, but it is not so easy to do that for a number of reasons.

I have a lot of blocks from many generic basic sets as well as most of the specific sets like the animals, sights to see, etc., and all the blocks are have been mixed together, so I have no idea which sets have exactly how many of what types of blocks. You can see my nanoblock toolboxes below. 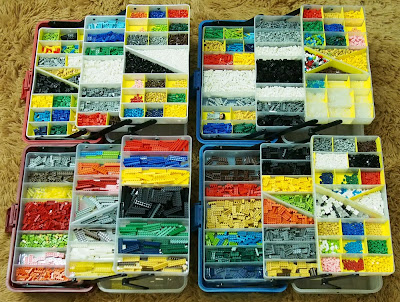 Another thing to consider is that there are many ways to layout the blocks to achieve the same final design, and different layouts will use different number and types of blocks, so even if I can tell you that it will take two basic monochrome sets to make something, it is possible that it could be done with a single set if you just use the blocks a bit differently.

Now you see why it is so hard to answer that question earlier? Hahaha ...

How to Get Started

So then, what is the best way to get started with custom nanoblocking? Probably the same way I got started, which is to buy the basic nanoblock sets. There are four basic sets available as shown below. 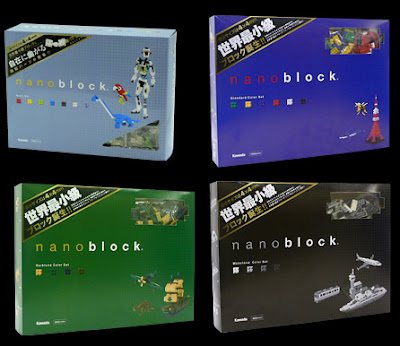 I would recommend getting one of each set to get started. That will give you around 4200+ blocks to play with. If you get it from Plamoya which usually has them at discount, it will cost around US$120 for all four sets (not including shipping). It is also good to get them all at once because you save on shipping. Having these four sets, you should have enough blocks to build many of my designs.

This is a lot cheaper than starting with the small specific sets, like the animal series, which sells for around US$10 each, and usually comes with around 150 blocks.

Now, I know spending over a hundred dollars may sound expensive, but remember, this is something you can build and rebuild over and over again. It is a hobby that will bring you many many hours of fun.

Over time, you will probably start to feel that you want more colours to play with. To do that, we turn to the smaller specific sets. Here are some examples:

There are many others, so do browse around nanoblock stores to find new colours to add to your palette.

Recently, new types of blocks have also started appearing in the latest series of marine animal nanoblock sets. The moon jellyfish has a new “L” shaped block and also 2x2 round block. The others, like the giant squid, fiddler crab, great white shark, etc have some new blocks too that looks interesting.

One thing I would like to stress when it comes to building my designs is that you do not have to do it exactly as shown in my build instructions. You can adapt it to your needs.

Most of the time, you do not need to use the same types of blocks as I do. You can use any block you have, as long as it achieves the same result. For example, instead of using one piece of 2x4 block, it’s possible you can use two pieces of 1x4 block. The only thing to be careful with is when those blocks need to hold other blocks together.

You can also change the colours used, as long as it works. I have dark mustard yellow colour chopsticks in my nanoblock Sushi Set design, but you can always change it to brown, black, red, etc. to suit your needs.

Feel free to be creative! Building in nanoblock means you can always make changes, so do not worry about making mistakes. Experiment as much as you like until you are satisfied.

Posted by Chris Nanoblock at 4:55 pm