The maneki-neko is a common Japanese figurine (lucky charm, talisman) which is often believed to bring good luck to the owner. In modern times, they are usually made of ceramic or plastic. The figurine depicts a cat (traditionally a calico Japanese Bobtail) beckoning with an upright paw, and is usually displayed—often at the entrance—of shops, restaurants, pachinko parlors, and other businesses. The maneki-neko is sometimes also called the welcoming cat, lucky cat, money cat, happy cat, beckoning cat, or fortune cat in English. - From Wikipedia 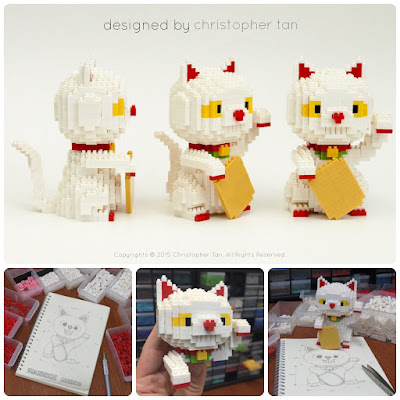 Japan has a long tradition of the lion dance and the dance is known as shishi-mai (獅子舞) in Japanese. It is thought to have been imported from China during the Tang Dynasty, and became associated with celebration of Buddha's birthday. The oldest surviving lion mask, made of paulownia wood with an articulated lower jaw, is preserved in Tōdai-ji in Japan. The dance is commonly performed during the New Year where the lion dancers may be accompanied by flute and drum musicians. - From Wikipedia 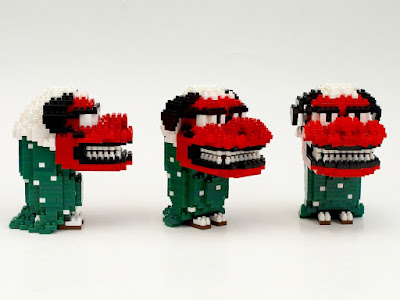 Posted by Chris Nanoblock at 11:36 am